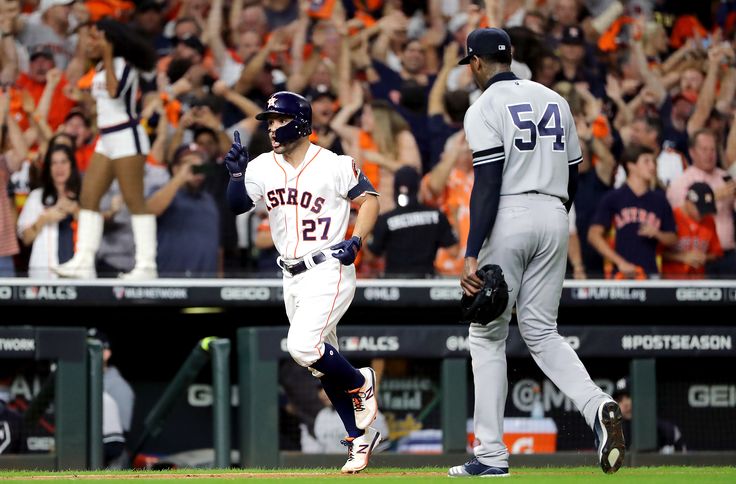 The Yankees elimination in the ALCS 2019 was a devastating end to their season. Of course, a walk off home run from the opposition is a tough pill to swallow.

When the team swept the Minnesota Twins, there was a lot of hope in this year’s team. Be sure to visit our Yankees Win Division 2019 post to read about how the team was able to win the division with different players each night.

When the series first started, the Yankees took Game 1 in Houston. However, Game 2, 3 and 4, the Houston Astros won. But in Game 5, the Yankees took control of the game and won with a score of 4 – 1. Not all was lost.

Could the team win the next three games to upset the Astros? Indeed, back in 2004, the Red Sox were able to march back from 0 – 3 deficit. Was it possible for this to happen again? Sadly, there wasn’t enough gas in the tank to come back and force a Game 7.

With Aroldis Chapman getting two out in the bottom of the ninth; Jose Altuve stepped to the plate and hit a walk off two run home run to win the game.

No doubt, this wasn’t what the team hoped for.

In the first place, one of the biggest issues the team had was starting pitching. None of their pitchers were able to go deep into the games in the ALCS. Even though the pitching wasn’t bad in the ALCS; it wasn’t enough to win against the Astros.

So, now they will have the off season to contemplate their next move. Even with all the injuries the team had during the regular season; they were able to win 103 games.

One of the team’s biggest needs is a bona fide starter. Also, will Giancarlo Stanton rebound from his injuries and be able to play left field for the remainder of his contract?

What moves will they make in the off season?