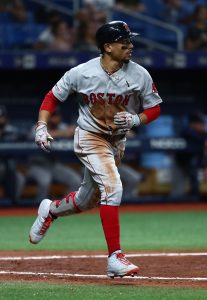 With a flurry of action this season; the Red Sox trade Mookie Betts. Since there have been rumors the entire off-season; this latest news was expected.

Of course, rumors have been circulating since last year. Because the Red Sox couldn’t seem to get anything done in signing Betts to a long term deal; this wasn’t a surprise.

Although, the  MLB cheating scandal has been the focus in the news the last few weeks; there was no question that a deal would be done prior to Spring Training.

So, after weeks of speculation; Chaim Bloom has sent both Mookie Betts and David Price to the Los Angeles Dodgers. In return, the Red Sox will receive 23 year old Alex Verugo.

Moreover, this trade will get the team under the luxury tax threshold. By saving millions of dollars, the team will begin their rebuild.

Although the Red Sox have many players who helped them win the World Series in 2018; they regressed in the 2019 season.

Since the Winter meetings, many have said the New York Yankees have won the off season. Although the Dodgers lost out on signing Gerrit Cole earlier; they have now acquired two big pieces to make them a favorite. Be sure to read our 2020 Winter Baseball Meetings post to read more on the off-season.

With acquiring Mookie Betts and David Price, did the Los Angeles Dodgers win the off-season? Indeed, this was one of the most stunning deals of the season.

Ultimately, Bett’s bat and defensive skills will have one of the best outfielders in the game.

Meanwhile, with both Cody Bellinger and Mookie Betts; the Dodgers will now be considered a favorite.

In summary, we may see both the Yankees and the Dodgers meet in the World Series.