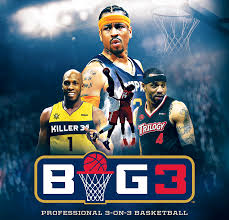 Power v 3’s Company matched up for the BIG3 Championship game last night. After both teams won their playoff match-up games in Dallas last Friday night; they played the Championship game in front of a big crowd at the Barclays Center in Brooklyn, New York.

So, last week Power beat the Number 4 seed, Tri-State in an exciting game with a final score being 51 – 49. And, 3’s Company ran away with a win in their semi-final match-up against the Number 2 seed against the 3-Headed Monsters with a score of 50 – 28. To read more about the semi-finals, be sure to check out our BIG3 Season 2 Basketball Playoffs post.

With Andre Emmett establishing himself as one of the best scorers in the league; there were questions if Power was going to have the defense to stop him from scoring. In addition, the 3’s Company Coach, Michael Cooper has given the team a different look on each game they played.

With some of the biggest NBA players set to play in the Championship game, this game surely attracted a lot of attention. Since Power had one of the best records and was the Number 1 seed, they were expected to win the championship.

From the beginning of the game, Power started out strong. When the second half began, the score was 47 – 29. However 3’s Company started playing better and it became a much closer game. Although they made it a closer game, Cuttino Mobley made the final shot to win the game for Power.

So, Power was crowned the Champions for Season 2 of the BIG3. Of course, 3’s Company should be proud of their accomplishments as they had the third best record in the league. In my opinion, it was nice to see Nancy Lieberman’s team win. As the first female coach in a professional men’s sport league, we hope to see Nancy back as Power’s Coach for BIG3, Season 3.

In summary, Ice Cube wants to recruit bigger retired NBA players to play in the BIG3. No doubt, with bigger signings of players, the league will grow and continue to get more hype.