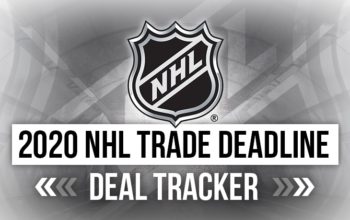 The NHL 2020 season is already 70% complete in the regular season. With yesterday’s trade deadline passing; are you ready to catch up on deals that could impact your favorite team?

For the last several days, there has been a flurry of movement in the NHL. So, are you ready to see what your favorite team did? Of course, every year, there is always a lot of activity before and leading up until the deadline. Also, there are many teams that decide to stay put.

The following are a list of trades that were made:

With the above deals complete, there were also several other deals struck as well. In fact, some of these deals could have an impact on their division. For instance, the Las Vegas Golden Knights, the Boston Bruins, and the Edmonton Oilers also made deals to bolster their team.

Since many teams are still in the hunt with only a few points separating them; how will these trades impact the teams down the stretch? Be sure to visit our Round Three NHL Playoff Schedule post to see what teams were in the playoffs last year.

Although there are winners and losers from the trades; how will these deals play out the rest of the season? Since the Bruins were in the Stanley Cup final last year; did the team do enough to get back there, this year? Be sure to check out our Boston Bruins Stanley Cup Loss post to read more on last year’s disappointing loss to the St Louis Blues.