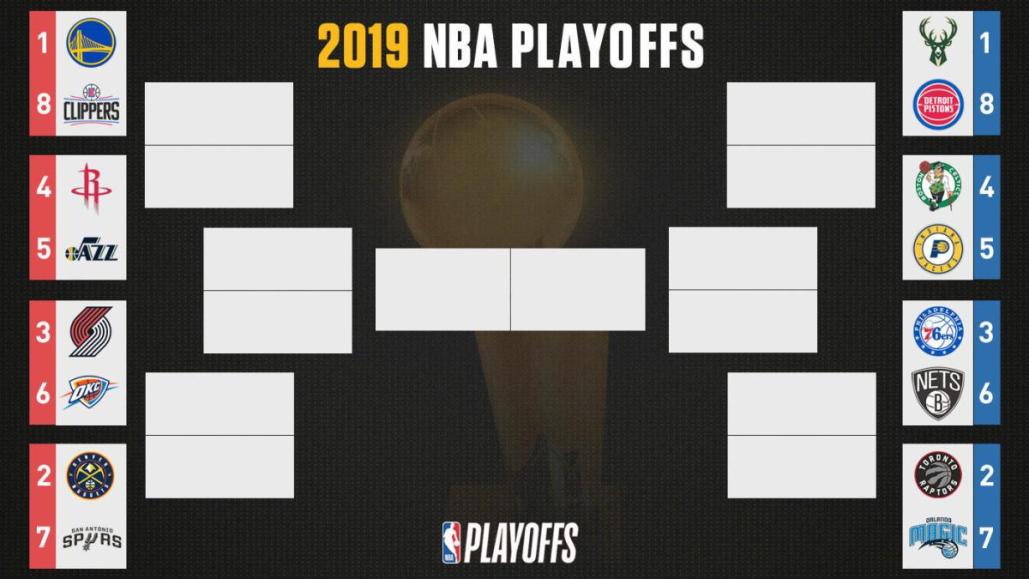 NBA Playoff Bracket includes sixteen teams. To read more about the road to the playoffs; be sure to visit our NBA Playoff Picture 2019 post. Now that the playoffs have started and we have scores from this past weekend; let’s take a look at the postseason.

In the Western Conference, the number one seed, the Golden State Warriors will play the number 8 seed, the Los Angeles Clippers. Of course, the Warriors are looking for a third straight title. And, they easily defeated the Clippers with a score of 121 – 104.

In addition, the number two seed, the Denver Nuggets will play the number seven seed, the San Antonio Spurs. Meanwhile, this game provided plenty of excitement and came down to the final few minutes of the game. The Spurs beat the Nuggets with a score of 101 – 96.

The number 3 seed, the Portland Trail Blazers will play the number 6 seed, the Oklahoma City Thunder. Also, another close game – the Trailblazers defeated the Thunder by a score of 104  -99.

Also, the number 4 seed, the Houston Rockets play the number 5 seed, the Utah Jazz. Finally, in the series rematch from last year – the Rockets took the lead over the Jazz.

In summary, the first round should provide plenty of excitement.