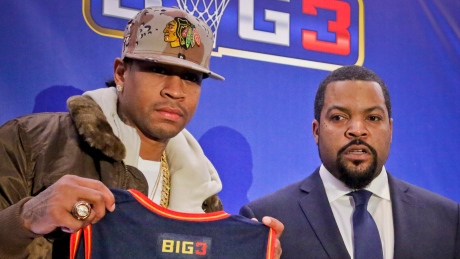 Ice Cube suspends Allen Iverson for one game. As a consequence of Iverson missing several games, it has put the league in an awkward position.

What do you do when fans are expecting to see Iverson play?

Because Iverson didn’t play in Philadelphia on July 16th, many fans left early due to Iverson not playing. Although, no one knew why he wasn’t available to play, he did make it to the arena to sign autographs and coach.

For the game on July 23rd in Nashville, Tennessee, Iverson did play. However, he was overshadowed by the play of Al Harrington, Kenyon Martin and Rashad McCants.

Again, on July 30th, Iverson didn’t show up for the game in Dallas, Texas. Because, the league didn’t have any information on his absence, they were launching an investigation to figure out what happened.

Because Iverson has not shown up, he has been given a one week suspension. With him not showing up, it hurts the league.

So, with Iverson not showing up, Ice Cube had to hold him accountable. By suspending Iverson, he hopes to set an example as he wants the future of BIG3 to succeed.

Since Iverson is one of the big name players in association with the league, it is important that he set an example. By the same token, he has put the league in an awkward position.

In addition, the BIG3 depends on all their star players. Of course, they want to continue to grow in the future. As the league continues to expand, it is imperative that all players take their commitment seriously.

Although the BIG3 games are tape delayed, they are doing okay in the ratings. As Ice Cube’s BIG3 league continues to grow in popularity, it has become a huge hit wherever they play.

How do you feel about Allen Iverson’s suspension? Will this set an example for the future in BIG3 games?